Four decades ago, Cancún was a deserted island and few even knew of its existence. 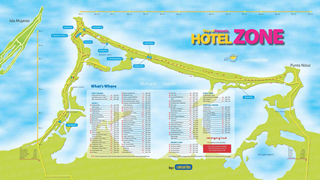 Located in a nearly flawless region of the Caribbean, it consist of a series of sand dunes in the shape of a number “7″ some parts of which are only 20 meters (66 ft) wide and separated from the mainland by two narrow canals that open out on to a huge lagoon system. The coast is comprised of marshes, mangroves, virgin jungle and turquois beaches. Even now its name is not totally clear: some maps called it “Kankun” (a single word written with the two “k’s”), which means “pot of snakes” or “nest of snakes” in Maya. However, in the first Infratur documents (a government agency existing prior to the creation of Fonatur), it is written as two words, “Kan Kun,” and occasionally, “Can Cún” (in its Spanish form). The current name of “Cancún” is a natural phonetic development that facilitates pronunciation.

The Cancún Project was officially approved in 1969, but didn’t begin until January, 1970, when the first Infratur technicians arrived. The initial objectives of the project were to open up a road from Puerto Juarez to the island, design a Master Development Plan, and build a provisional Cancun Airport strip (located in the area designated for city development, at the site of present-day Kabah Avenue, in front of the Ecological Park).

The basic Master Plan called for three items:
1) Build a tourism zone without permanent residential areas, like a tourism corridor (given the characteristics of the land itself), with hotel installations, shopping centers, golf courses and marinas;
2) Build a residential zone for permanent residents. In other words, an integral city, in the northern part of the territorial reserve, with residential and commercial areas, roads, public buildings, schools, hospitals and markets; and
3) Build an Cancun International Airport to one side of the Cancún-Tulum highway (under construction at the time), on the mainland south of the island.

Hotel Zone development was, in turn, divided into three phases. The first comprised the area from BahÌa de Mujeres to Punta Cancún and the coast up to the inner limit of Bojorquez Lagoon; the second phase ran from Bojorquez Lagoon to Punta Nizuc, and the third from Punta Nizuc south, to the limits of the territorial reserve.

The first hotels opened in 1974 (Playa Blanca, Bojorquez and Cancún Caribe); the Cancun International Airport was inaugurated with 2,600 meters of runway and operating capacity for wide-cabin airplanes; and Infratur and Foqatur government agencies were merged to form the National Foundation for the Promotion of Tourism (Fonatur).

From 1989 to date, Cancún has been the nation’s most dynamic city. It contributes a large percentage of Mexico’s tourism-related revenue and accounts for much of Quintana Roo’s gross domestic product. There are currently more than 500,000 inhabitants in the urban area. Cancún has become the country’s largest tourism resort and is the most prosperous city in the Yucatán Peninsula. It is also the Caribbean’s premier destination, surpassing even the Bahamas and Puerto Rico.

The future is promising. Puerto Cancún, a huge, deluxe marina with low-impact hotels, is projected for development north of the Hotel Zone. To the southwest, toward the airport, more hotels, golf courses and a modern hospital are scheduled for construction. In addition, major resort development is contemplated for the 131-kilometer / 81 miles Cancún-Tulum tourism corridor.